Cllr Roz Smith has been advised that following receipt of monies, works to re-surface highway in Latimer Road are being scheduled to take place in August. Road markings will then be re-done and correct signage erected.

Here is an update from Cllr Roz Smith

A gas main had been discovered* at the Marsh Lane junction, thereby disrupting works and causing about a two-week delay, although they are expecting to make time up elsewhere with works that are easier to install.

Parking spaces outside the shops could be suspended as works are underway; businesses are being kept informed and the safety control officer is on hand to help with large lorry deliveries.  There have been some complaints that businesses are suffering financially; government ruling is that compensation cannot be paid in these circumstances.   (*This utility pipe had not appeared on records.)

Temporary traffic lights will be on when work to finish junction kerbs are underway – they are removed overnight.  At the moment 24thJuly is the date for the change in direction of traffic that runs in front of the shops.

The JR junction works are on hold, with works planned to start at the top of Headley Way working their way on one side of the road towards the JR junction.  These are due to start week beginning 25thJune.  The advisory cycle lanes have been masked out; note I asked for the cyclists’ dismount signs to be removed as not necessary!

Safety through works has been an issue, e.g. jumping of red lights but no serious incidents have been reported.

I enquired when the Old Road continuous cycle lane works will start and is this still in the project.  It is still in the scheme, will possibly be a priority next year.  I also asked about the promised 20mph consultation for Windmill Road.  The consultation is not part of Isaac’s remit and will depend on the highway safety team. I will continue to chase!

My last questions related to monitoring.  There will be data showing before and after scheme is completed to show “benefit realisation”

Please note that the dates given are subject to change – e.g. finding another unrecorded utility pipe!

Residents living in and around Woodlands Road have asked us to request road repairs for some considerable time, but these have not been assigned sufficient priority to rise to the top of the list. This was one of the most frequent complaints we logged in our recent street surveys in the area.

We’re pleased to tell you that Woodlands Road will be patched from tomorrow 22nd March. We have had to fund this from a number of different pots – the Headington Ward budget/CIL allocation, funding from Vital Energi’s community contribution, and the City Council’s Highways Engineering budget. Work to complete both sides of Headley Way is likely to take more than 5 days so it’s quite a big job. We’re glad the work is being done before the Access to Headington works re-start in earnest!

We have just been advised that the traffic regulation order (TRO) to accommodate the parking slots and lining of Latimer Road outside Beech House will need to be amended to match up with the slightly changed access points constructed during the build. The reason that the two don’t match up is that technical difficulties were encountered – unexpected infrastructure below the road surface meant that changes had to be made.

This matter has been referred back to the Traffic Regulation Order team at the County Council – if the construction company paints in lines according to the current TRO, they won’t work.

Ward councillors are just as frustrated as residents about all this. We shall now push the County TRO team for more information, but it looks as though a further consultation will be needed before the TRO can be amended. Hopefully this won’t be a wide area consultation but it will still mean further delay. We shall let people know more as we get more information.

In response to complaints by residents in the area, Altaf and Ruth have agreed match funding with Oxford City Highways Engineering to fix potholes, patch road edges and surface skim (where necessary) Woodlands Road either side of Headley Way up to the Sandfield Road junction with money from Headington Ward’s CIL budget and Vital Energy community contribution.

We have wanted to get this work done for some time, but have needed to save up for it as the total cost is over £2300. We are grateful to Oxford City Council and Vital Energi for their assistance with funding.

Lines will be refreshed in the following roads, date to be confirmed.

Altaf and Ruth negotiated match funding of the above work with City Highways Engineering along with allocations from the Headington Ward budget and Community Infrastructure Levy budget.

This will help with highway safety and enable NSL to enforce parking regulations to benefit our residents.

The latest news on the surfacing, signing and lining in Latimer Road following the works done by Winvic is depressing for residents.

We are advised as follows.

A new Traffic Regulation Order (TRO) has been prepared for Latimer Road – the development at Beech House has prompted some changes in the old one. The new TRO is in place but can’t be enforced until the construction site has been vacated.

The County Council and Winvic made a verbal agreement that Winvic would make good the road surfaces/kerbs damaged by construction vehicles at the end of the project. Since that time there has been a succession of site managers at the Latimer Road site, and the exact nature of the ‘gentlemen’s agreement’ is now being challenged. There is email correspondence to show the agreement was made, and there are many many photographs on file showing damage being incurred.

The agreement was to resurface the part of Latimer Road from London Road down to just past the Latimer Grange access road, ready for re-lining in accordance with the TRO.

There was a slight mix-up last weekend – the lining team could not do scheduled work, found out that there had been large numbers of complaints on Fix My Street about Latimer Road, and re-lined Latimer Road but in line with the old TRO. This has led to some confusion.

The lines will be re-done when the road has been resurfaced, and the resurfacing of the road cannot happen until the company agrees the cost of reparation with the County Council. At the moment, an offer has been made which is short of the amount specified in the County quote. Once those discussions are resolved (the matter is currently being considered by Winvic directors) then the work can go ahead, the lining can be re-done in line with the new TRO, signage will be put up and parking can then be enforced. But clearly we don’t yet know when that will be.

This is a matter of great concern to councillors and residents, and we are doing all we can do expedite its resolution.

The County Council is still waiting for additional funding to be approved.

In the meantime they are still looking to get preparatory works completed to reduce the level of disruption when works start in earnest. With that in mind they want to continue some off-peak working on the islands outside the JR access on Headley Way.

They are aiming to turn their attention to the roundabout this time. Key points to note:

Significantly less work has been going on over the last few days. Overnight temperatures need to be higher in order that materials can properly cure and allow the line markings and anti-skid to last as long as possible. 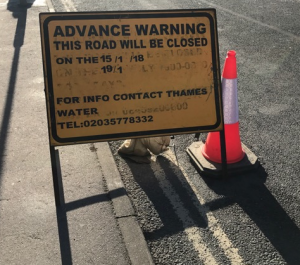 The scheduled Thames Water work is to the fire hydrant which is located on the pinch point in Lime Walk near the junction with All Saints Road, TW has to “re-do the valves”
The bit of Lime Walk next to the buildout will be closed for works from 15-19 January in principle, but the work may be completed inside three days – that extra time is allowed for ad hoc technical/engineering problems
So from Monday, access from Old Road to Lime Walk will be signed “Access to frontages only. No through road” and it will be a dead end just before the buildout. No parking slots should be affected.
Those accessing Lime Walk from London Road will see diversion signs from Monday morning and the diversion signs will be back up at the All Saints junction advising traffic to divert via Stapleton or Bickerton Roads.
We are trying to find out how many houses have been letter-dropped by Thames Water and have advised Highfield Residents’ Association

There will be traffic control (multi-way signals) at JR mini-roundabout in Headley Way this weekend.

Enabling works for the County Council’s Access to Headington scheme are being scheduled at weekends to minimise disruption weekdays.

Delays are likely 6 and 7 January