The Headington Neighbourhood Plan will go to referendum on Thursday 4th May. The arrangements will be as for the local County Council elections held that day. The question on the (green) ballot paper will be:

“REFERENDUM ON THE NEIGHBOURHOOD PLAN FOR HEADINGTON

Do you want Oxford City Council to use the Neighbourhood Plan for Headington to help it decide planning applications in the neighbourhood area?  YES <box> NO  <box>”

The Chair of the Headington Neighbourhood Forum has written to us with the following information:

We do hope that all Forum members and those who have been following our progress will turn out and support the Neighbourhood Plan.  Voter registration is open until 13th April, and if you cannot vote in person you can apply for a postal vote but need to complete and return the application form by 18th April.

The final version of the Plan is available at: http://bit.ly/HNF-Plan

A key part of the plan are the community policies and actions.

Click on this link to find out more about the up and coming Forum meeting on 2nd October!

We are happy to promote the next meeting of the Headington Neighbourhood Forum. It will take place on Wed 10 February at 7.30pm – you can see details by clicking on 10th Feb 2015 HNF Poster

Please do come along and find out about the work residents are doing to create a draft Headington Neighbourhood Plan!

The short answer is NO.

Nothing would have delighted the Headington Neighbourhood Forum more than to have included Stansfeld in a forthcoming neighbourhood plan, but there are criteria governing what is included or excluded within a proposed neighbourhood area boundary.

Land within a parished area cannot be included within the Headington Neighbourhood Area.  Stansfeld falls within the Risinghurst and Sandhills Parish Council area boundaries.

Stansfeld could be included within a Risinghurst and Sandhills Parish neighbourhood area, if the parish decides to develop one, and this might potentially safeguard its future in terms of what the land could be used for. County Cllr Roz Smith has been pushing for this to happen. But Stansfeld cannot fall within the Headington Neighbourhood Area.

This information has been checked with Oxford City Council today and is entirely consistent with policy guidance given previously.

Oxford City Council recently launched its Corporate Plan 2013-7. This key document sets out its main strategic direction over the next four years, as it works with partners to make Oxford a world-class city for everyone.

§  Strong, active communities, which are socially cohesive and safe, and where citizens are actively engaged in pursuing their own well-being and that of their communities

§  Cleaner, Greener Oxford, in the city centre, our neighbourhoods and all public spaces 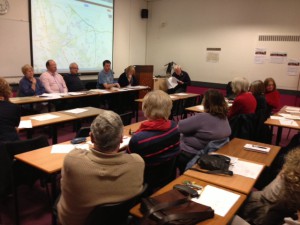 A meeting was held yesterday evening by the Headington Neighbourhood Forum to hear an update on the work the Interim Steering Group has been doing:

St Andrew’s School Hall was packed last night with standing room only for the public meeting organised by Headington Action to discuss a neighbourhood plan for Headington. Congratulations to the HA steering group Patrick Coulter, Richard Bradley, Keith Frayn, Marie Vickers, Pete West and Liz Grosvenor for all the hard work they put in and to Sue Baker, the School’s Headteacher, for hosting the event.

Richard outlined the differences between community plans and neighbourhood plans, and explained that once a fully-consulted upon neighbourhood plan is produced by those living or working in Headington, externally inspected and agreed by referendum, all future land-based planning decisions in Headington will need to comply with its policies and conditions.

The Chair and Secretary of the Wolvercote Neighbourhood Planning steering group then gave a presentation on the work that they had been doing, and this fired the enthusiasm of many of us in the audience. The process of producing a neighbourhood  plan for Headington will take a long time – possibly in excess of two years – and will include continuing consultation, so many local residents need to get involved to make it work.

After various question and answer sessions, a vote was taken and there was overwhelming support from those who attended. Patrick asked if anyone was prepared to help form the steering group to start off the process, and was hoping for expressions of interest from 20 or so people. In fact, 20+ people signed up and we have more names on a waiting list of those who would like to get involved but were unable to attend, we shall send those details to Headington Action to add to the list. One of the first tasks of the steering group will be to decide where the boundaries of the Headington  neighbourhood will be.

Those at the meeting were interested in looking at the neighbourhood plan for Exeter St James which is an area which has a lot of similarities with Headington. If you would like to see this, please click here.

It was good to see representation at the meeting from the universities, the hospitals’ trust, and both councils.  The next two years will see exciting new developments! We are glad that the Localities Act has made neighbourhood planning possible and are proud to support this initiative in Headington.