We have received the following letter from the customer services manager at Thames Water, addressing some concerns voiced by some residents in Headington Ward

I am writing to inform you of some work we are currently carrying out at one of our local service reservoirs. As part of a regular inspection some small defects have been identified which means we are re-routing water from other parts of our network whilst they are being resolved. This has meant
that some customers in the area have been experiencing low pressures at the busiest times of the day. The number of calls we have had about this is very low and we are working as quickly as possible to get back to normal.

With your help, we have compiled a list of all the flooding and sewage spill-related incidents in Headington Ward over the recent past, and it’s clear that a number of incidents reported in Old Headington are interlinked.

The combined sewer at the lower end of Osler Road contains both floodwater and sewage in separate pipes that are located quite near to each other. This combined sewer is also located very near to a main sewer running from the JR Hospital.

The flow from the combined sewer does not continue down St Andrew’s Road to Stoke Place and Dunstan Road. Instead, it turns right and is pumped uphill towards Laurel Farm Close. However if the manhole cover above the combined sewer is forced up above the ground after heavy rain or when there’s a blockage, the floodwater and/or sewage runs down the hill towards Ruskin College, and causes a lot of distress to those living at the bottom of the hill. We are aware that the guide hall has been flooded and that several properties in Stoke Place have been invaded by sewage in recent months.

The meeting with Thames Water was very helpful. They are working hard to investigate whether there is any mis-connection elsewhere in the area which could cause a crossover between fair and foul effluent, and we’ve heard today that some progress was achieved only yesterday by Thames Water in trying to track this faulty connection down.

Thames Water have offered to give local councillors copies of ‘sewer maps’ of Headington Ward, and we think this will be very useful in trying to track down the source of these problems.

It’s clear that people get confused about who to report such incidents to – the city council? the County Council? Thames Water? Fix my street? to local councillors? to the Headington and Marston Forum? So one of the issues we are addressing is getting some leaflets printed up to give people clearer guidance.

We also discussed whether Headington’s infrastructure is fit for purpose both currently, and in the future when further planning applications are made by the universities and hospitals and other organisations in the area. Thames Water will investigate the capacity of sewers in areas such as Old Road, and liaise with the senior managers and planners at the city council once these results are known.

If you have experienced difficulties with sewage spills or storm water flooding in your area, and haven’t let us know, please do get in touch as we want to keep our files on this fully updated! That way, we can monitor Thames Water’s progress.

I have just spoken directly to TW maintenance staff

Water has been restored to the Churchill Hospital and surrounding areas. All homes should have water within the hour.

The junction is now clear at Old Rd/Windmill Rd

It’s possible that there has been ground shift after the recent heavy rains and that additional pressure has led to a burst, but it’s too soon to know 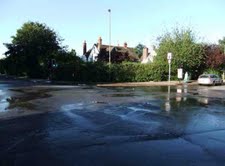 Bottled water is on its way to folk in central Headington this morning after the 3rd water burst in the Old Road area since last year.

Water pipes have been re-diverted, so the problem is now confined to
Headington ward south of London Road. The Oxford Mail is reporting that the problem may not be resolved till tonight.

This all adds to local residents’ fears that the infrastructure of Headington cannot cope with demand. David and I have written to City and County asking for a full investigation before any more building in the area takes place

For the latest news, please listen to Radio Oxford or follow @HeadingtonNews and @OxfordMail

Some of you may remember that we started a Water Watch site when there were so many problems involving Thames Water, and our inbox was ‘overflowing’ with emails from unhappy customers.

We are pleased to announce that we have just helped obtain compensation for another resident whose garden suffered from sewage overflow on four separate occasions, and our caseload has now reduced to one outstanding claim.

After a considerable period of time, and a great deal of inconvenience to those who live alongside Boundary Brook, we have received this promising message from Thames Water:

In terms of progress, the whole house misconnection in New High Street
consisting of 13 separate misconnected appliances has now been dye tested
to confirm correct rectification to foul.  More significantly, further
investigations have taken place at Manor Hospital and the flow monitoring
has confirmed that the surface water discharges from their storage tank do
correspond to the high flows experienced in the open culvert in Brookside.
However, whilst the connection of this tank to the surface water system is
in accordance with normal practice, our further investigative survey work
has lead us to believe that some of the flats behind the hospital are
misconnected into this tank rather than the foul sewer. A meeting with the
Hospital has taken place to explain our findings and appraise them of their
responsibilities for the private drainage on their site.  As the flats
drain to the sites private sewer it is the Hospital’s responsibility to
ensure the appropriate Housing Association rectify the misconnections. This
is now being pursued by the Hospital who are thus far cooperating fully. I
would just add that whilst our investigations to date have found evidence
of domestic sewage misconnection from the flats, we have not found any
evidence of misconnection at the hospital itself .

We are delighted that the hospital is giving full co-operation in trying to ensure the housing association sorts out the problems in the flats.  We shall keep you posted of further developments and continue to press hard for as speedy a resolution as possible

Thames Water has confirmed to me that their Planning Department is arranging to repair the water hydrant which is leaking opposite McMaster House.

They are now treating this matter as urgent

Thames Water representative Huw Thomas will visit one resident to apologise in person, and will look into compensation and get back to us about their policies. He will also investigate how Thames Water has dealt with one particular compensation claim.  He has ensured that incorrect instructions given on the Thames Water website have been corrected.

Following a meeting between the Head of Environmental Development (who also chairs the Oxfordshire Flood Partnership meetings attended by reps from lots of other agencies), David has secured an agreement that a named person at the City Council will be tasked to manage specific complaints regarding flooding and sewage problems. We will let you know the contact details for this named officer as soon as we get them

I have been pleased with the improving response to residents’ problems with sewage and clean water enquiries over the last three months, particularly by Peter Claridge of Thames Water who has worked hard to resolve outstanding difficulties.

There are, however, two big multi-agency problems which remain unresolved and which will require representatives from various agencies like the City, the County, the Environment Agency, and Thames Water, among others to sort them out.  There is a multi-agency committee at which these issues can be raised and this is chaired by John Copley, the Head of Environmental Development.  I have made an appointment with him and my colleague Cllr Altaf Khan for 27 January to discuss progress and/or action  in Brookside and Northway.  If you know of any other problems of continuing flooding or water contamination in your area please contact David or me – just click on Contact us on centre toolbar