We share this interesting information gained via a question from a Lib Dem colleague to the County Council Cabinet yesterday.

Cllr HOWSON: Since buses returned to Queen Street, how many incidents involving buses and either pedestrians or cyclists have been reported and how many of these resulted in someone being taken to hospital?

COUNCILLOR YVONNE CONSTANCE, CABINET MEMBER FOR ENVIRONMENT
We can confirm that there have been no reported accidents from the reopening of Queen Street to buses on 24 October 2017 until end of February 2018. We only hold data for recorded accidents and this would not include incidents that resulted in no injury or were not reported.

We’ve just received some answers to further questions raised at last night’s Headington Ward Focus meeting from the project team. Here they are.

Is there enough space for a buggy on the crossing island?

Yes – the island will be 2m wide

Can there be CCTV enforcement to ensure drivers observe yellow boxes?

Down the line – possibly. The council is seeking powers to do this but is currently not able to do it. At present only TfL have been granted delegated powers to enforce yellow box infringements which are otherwise the preserve of the police.

People are concerned about tree felling in the nesting season

Concerns about cyclists being “car doored”

Safety concerns re drop off/pick up at St Joseph’s

This is an existing issue.  Any parking provision intended for use by parents might get abused by hospital goers so the situation would have to be led by the school (parent parking charters / walking buses / cycling initiatives)

Here are the answers by councillors to questions raised at yesterday evening’s Headington Ward Focus Meeting about the new crossing. 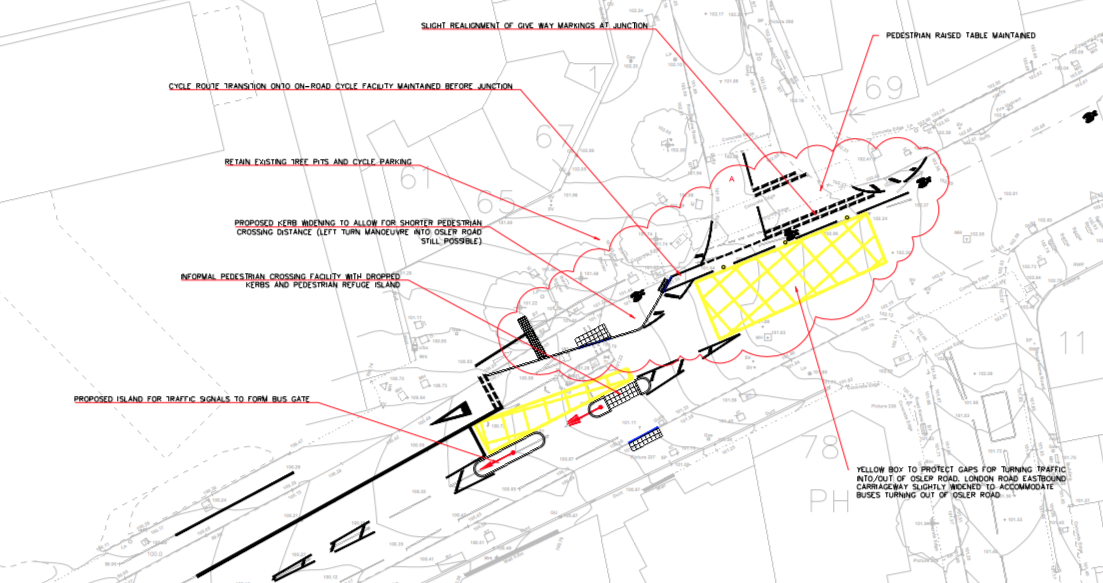 Why is it needed?

Why introduce it at such short notice?

Funding became available. It was considered best value to the taxpayers and provide least disturbance to residents during the Easter school holiday period

There were plans to put in a toucan crossing here from the outset, and many responses were received for this from the community, but it fell out of scope when money got tight. It went back in as priority once funding was available due to safety concerns

Who comes up with options for road crossings?

Amec Foster Wheeler provide alternative options and explain which ones are most feasible in their view in response to a spec from the County Council.

What spec was given?

A broad one. Controlled or uncontrolled crossings, either directly across the road or staggered.

Does the County Council have to go with the Amec recommendation?

No. This plan was subject to quite a lot of debate and challenges were made by the safety team in order to find the best option

Was money a factor in coming up with an uncontrolled, rather than a controlled, crossing?

Absolutely not. Safety concerns were prioritized. It wasn’t possible for a straight controlled crossing to be put in without a second set of lights, and the synching of these and delays to public transport made this prohibitive. A staggered crossing would result in further wait for pedestrians, and the size of the island would block movement into Osler Road

Will the crossing be used by cyclists as well as pedestrians?

It is first and foremost a pedestrian crossing. It would technically be possible for cyclists to dismount, use the crossing and then resume cycling in the cycle lane opposite.

Who has been informed?

Letters to The Occupier at addresses in London Road between the garage and the controlled pedestrian crossing/lights have been sent by a distribution company.

Councillors are concerned about this as not all tenants in flats above shops may see the notification. We are also concerned that people in Osler Road, New High Street and Lime Walk have not been circulated, and we shall contact these residents ourselves.

Have the bus companies been informed?

Will this affect community projects?

It will not affect the greening project, the Headington Market, or the trees with the Christmas lights

Will any trees have to be taken out?

When will it happen?

Where will construction space be?

3 parking bays have been suspended in Lime Walk near KwikFit

Will there be works at weekends?

Your councillors called for the introduction of a safer pedestrian crossing at this point in the initial consultation, but were hoping that a controlled crossing option could be found. Traffic will be slow in the centre of Headington during April. We are concerned that there has been insufficient notice given to those affected although we understand the reasoning given, and we feel that residents in adjoining roads should have been leafleted. However we welcome much-needed safety improvements for pedestrians at such a busy location.

Here is the latest from County about the Access to Headington scheme.

We will start the last phase after Christmas between Slade Close and Old Road – this will take approximately four weeks to complete.

Traffic management will remain in place over the Christmas period, though we will remove as much as we can. Daily safety checks will be carried out

We are working in the final phase of this set of works and are on schedule to complete the main construction work before Christmas. There may be some minor work to do after Christmas but this will be minor and will cause little disruption.

The majority of the traffic management will be removed over the Christmas period however Churchill Drive will remain as access only and traffic leaving the Churchill site will continue to be diverted via Roosevelt Drive. The permanent traffic lights on Old Road have been switched on this week.

The team will start setting up begin on Tuesday 16th January, but this should not be disruptive to traffic. Construction work will start on Tuesday 23rd January. Information on programme of work will follow early January.

We are going to be holding a public exhibition on Thursday 14th December at the Heading Prep School between 2:30pm and 6:30pm. This is an opportunity to speak to members of the project team from the County Council, Skanska and the Designers. All aspects of the project remain the same as per the last public exhibition held in the Summer and all drawings can be found on the Oxfordshire County Council website.

All work will cease on Friday 22nd December for the Christmas period. Work will begin again on Tuesday 2nd January. Traffic management will remain in place during the closure for safety reasons. Regular safety checks will be made.

Here is a letter to residents from the County Council. 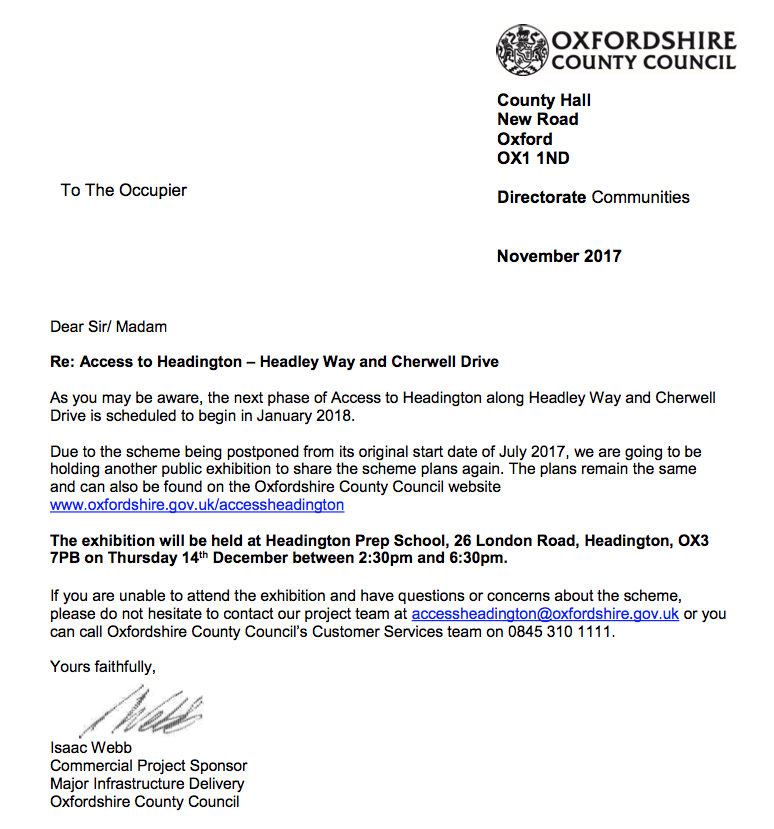 Bus stops and crossings in new highways works are always tricky in terms of off-carriageway infrastructure for pedestrians and cyclists as they are inherently points where desire line cross.

We asked the County Council about the possible conflict between bus passengers alighting and passing cyclists near the bus stops in the Slade. Here is the response we received:

The areas outside the bus stops and crossings are shared space rather than cycle lane/pedestrian lane so both users share priority.  The appropriate signage and markings will be in place in order to remind users of the change in priority.

We have been sent the following text of the temporary traffic order which takes effect from 2nd October. We have requested that Bickerton Road is considered as well as Stapleton Road as an alternative diversion route to Old Road for traffic from Lime Walk with support from the Chair of Highfield Residents’ Association.

This Order is a continuation of the Notice that came into force on the 11 September 2017 to cover the full duration of the works.  There are no changes to the restrictions.

In the interests of public safety it will be necessary for Oxfordshire County Council to temporality introduce the following to facilitate carriageway works:

A Temporary Traffic Regulation Order (TTRO) is being made to implement the temporary restrictions and will operate from the 2 October 2017 till the 13 January 2018.

(The maximum duration of a TTRO on a road is 18 months and on a footpath is 6 months, or until completion of the works, whichever is the earlier.)

Notice of intention to make the Order will be published in the local press.

Here are the two documents pertaining to this notice. 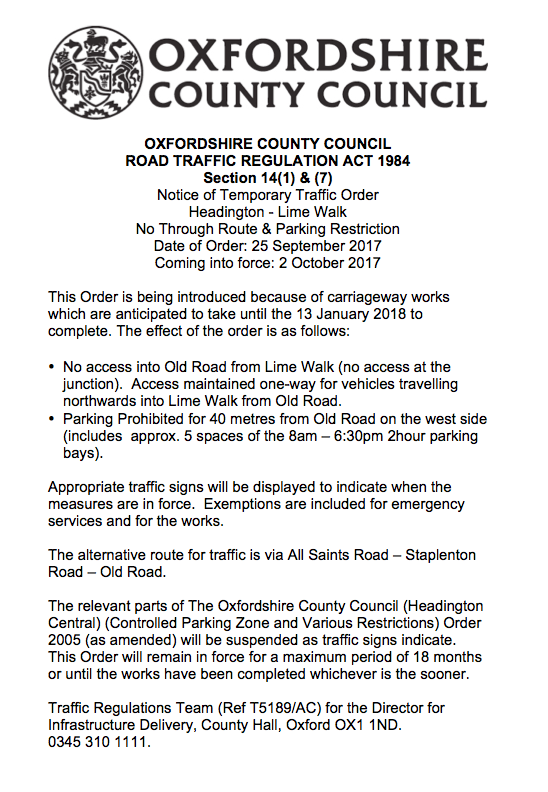 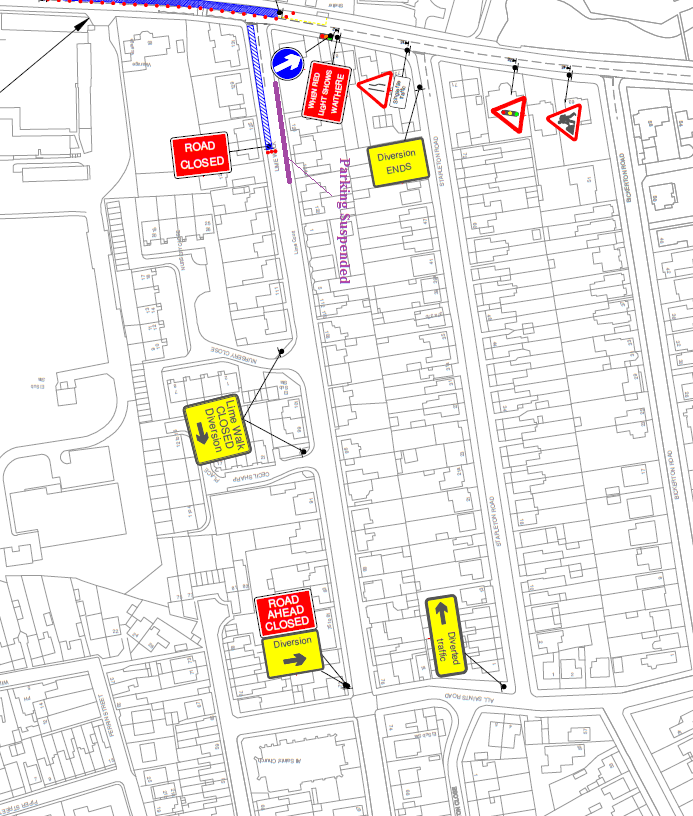 Here is a copy of the report which is going to the Cabinet Member at a meeting on Thursday. County Cllr Roz Smith will be attending.

Two things stand out from this report:

14. The Cabinet Member for Environment is RECOMMENDED to approve the proposals as advertised

We wanted to let you know that on 11th September we will begin work on Churchill Drive and it’s junction with Old Road.

The work involves installing traffic lights at the junction as well as re-aligning parts of the footway. We will also be doing small amounts of work at the Roosevelt Drive/Churchill Drive junction. The work is programmed to take 15 weeks to complete.

Over the first 9 weeks of the project we will be working mainly on Old Road under two-way temporary traffic lights. During this time Churchill Drive will be access only from Old Road, however emergency vehicles will also be able to exit onto Old Road from Churchill Drive. All other vehicles will be diverted via Roosevelt Drive.

Lime Walk will also be partially closed over the first 9 weeks. Vehicles will be able to access Lime Walk from Old Road but those wishing to exit onto Old Road will have to do so via Stapleton Road. We will be suspending 5 parking spaces on Lime Walk (spaces closest to Old Road) whilst we carry out the works around the junction.

We will be undertaking 1 weeks’ worth of night works (scheduled for week commencing 23rd October – subject to change) in order to carry out surfacing to the carriageway on Old Road. Night works take place between 8pm and 6am, though very noisy work will cease at 11pm as per our Section 61 agreement with Oxford City Council.

Once the work on Old Road has been complete, we will begin a short period of works to the junction of Roosevelt Drive/Churchill Drive. This involves some re-aligning of the kerbs as well as installation of cables under the road surface.

The work will be carried out by Skanska Construction. Should you have any questions or concerns regarding the project please contact our site project team at accessheadington@oxfordshire.gov.uk or you can call Oxfordshire County Council’s Customer Services team on 0845 310 1111.

We apologise for the inconvenience this may cause you and thank you for your cooperation.

The County Council issued the following notice in the local press yesterday. 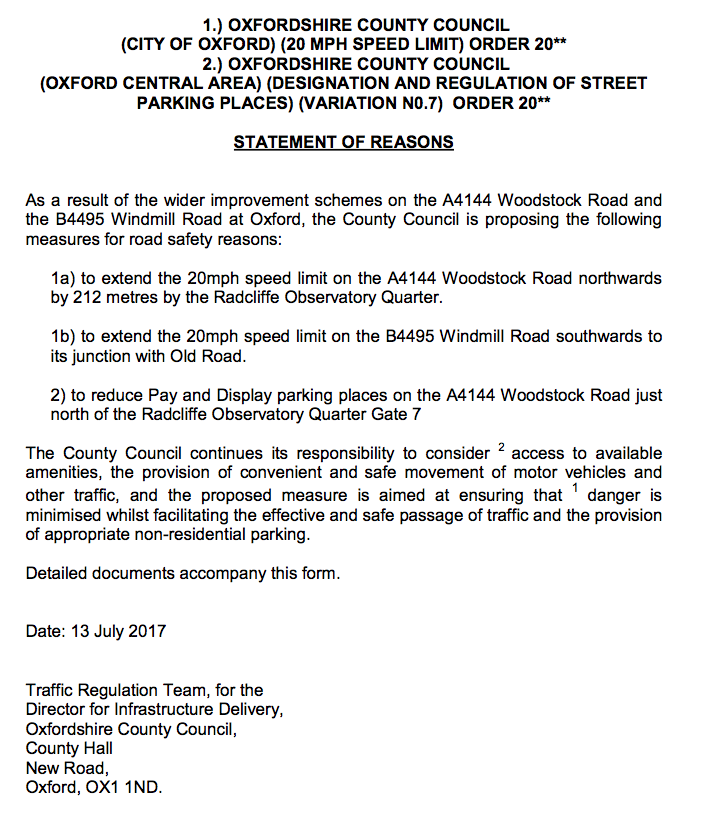 Objections to the proposals and other representations, specifying the grounds on which they are made, may be sent in by completing the online questionnaire or by writing (quoting ref: AK/12.6.134) to the officer below by 11 August 2017.

The Council will consider objections and representations received in response and they may be disseminated widely for these purposes and made available to the public.

Any unresolved objections will be reported to the Council’s Cabinet meeting later in 2017. The papers for the meeting will be available on the County Council’s website about a week before the meeting.