For anybody interested in the planning application for Clive Booth Hall at John Garne Way there is a drop in session on Thursday 22nd November 3-7pm at Post Grad Centre, John Garne Way.

Planning application ref no. 18/00688/FUL at 20 Osler Road has been called in for decision by East Area Planning Committee.

The application for an extension in Stapleton Road has been given delegated consent but there was a split decision on an application for a certificate of lawfulness for proposed use on a property in York Road.

We note that properties at both 18 and 20 Osler Road have sizeable planning applications on them and have obtained guidance from the planning officers about how these will be processed.

The same planning officer will deal with both the applications.

The applications are from two different applicants.

However the delegated decision for 20 Osler Road is currently due to be made sooner than the delegated decision for 18 Osler Road. We have asked whether the impending development at the adjacent property would be taken into account by the planning officer when considering the application at no. 20 but we are informed that this would not be a material consideration at that time.

Any queries, please get back to us – it’s a tricky one to explain!

We now have more details from the City Council – please see below. 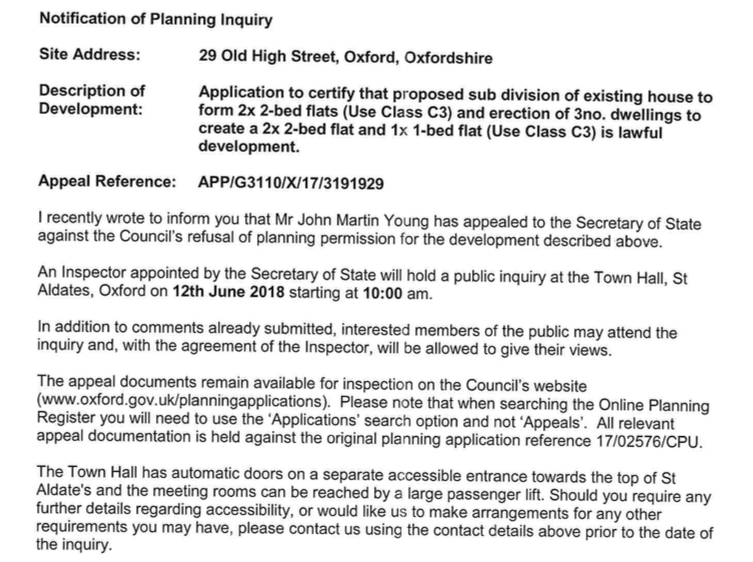 Unusually there has only been one permission granted in the last four weeks.

Formation of dropped kerb and alterations to garden to form off street parking.

Formation of dropped kerb and alterations to garden to form off street parking.

Application to certify that the proposed formation of a single storey outbuilding is lawful development.

The appeal against the following planning refusal was dismissed.

We’re advised of the following by Oxford City Council:

Mr Young has appealed against refusal of planning permission issued by the Council for the application to certify that Proposed sub-division of existing house to form 2x 2-bed flats and erection of x3 dwellings to create a 2x 2-bed flat and 1x 1-bed flat is lawful (planning reference 17/02576/CPU).

This appeal will be decided by an Inspector appointed by the Secretary of State at a public inquiry, date to be determined.

Those who sent in comments during the initial consultation period have until 5th April to amend or withdraw those comments, or to submit new or additional comments, copies of which will be sent to the appellant and the Inspector.