There has been a series of power cuts over the recent past from the substation next to the garage in London Road through a fairly large area comprising St Andrew’s Rd, St Andrew’s Lane, Laurel Farm Close, Osler Road, Old High Street (and we would assume) Larkins Lane.

The Customer Relations adviser at SSE says there is an intermittent underground fault which could be caused by a number of factors including subsidence, or a knock to the plastic casing of a cable or joint which has induced seepage of water.

When the fault occurs, a safety fuse blows in the substation and has to be replaced. SSE has put in some software to monitor this in the substation – it’s called a Kelvatek “bidoyng” and for those of you dying to know what that is, please click here (thanks to Alexandra for the link)

Apparently it detects a blown fuse, replaces it and also does a search of nearby lines to try and track exactly where the fault is happening. They have also carried out back feeding to try and identify the source. They have ruled out overloading though.

If we get any more details we will post them here. There is currently no guarantee that another power cut won’t happen again but it should be rectified much more quickly – SSE Community Officers have been out door knocking to give advice to their customers. 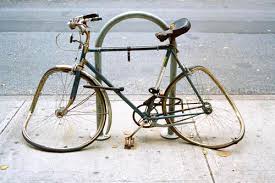 Abandoned vehicles have a negative effect on the quality of our environment in Oxford but the City Council has an officer dedicated to combat this.   He operates on behalf of the DVLA, using powers devolved from them, to report and remove untaxed/SORN vehicles from the public highway and other ‘off road’ areas.

He also acts on behalf of other Council departments such as Housing, Parks, and Corporate Assets, to investigate vehicles that they have concerns about and remove them. This is usually done through a 15 day notice, but if a vehicle is declared dangerous, it can be removed immediately.   This service is also offered to the private sector, such as housing associations, independent companies and private individuals.

All online and telephone enquiries are investigated, and he also tags and removes abandoned bikes. Most bikes are removed after bi-monthly inspection of the 186 racks throughout the city. Around 1,000 bikes a year are removed and these are offered to different charities or are recycled.

You can report an abandoned vehicle on the City Council website at https://www.oxford.gov.uk/homepage/122/report_an_environmental_problem

Thanks to all residents for sending in comments to the proposal for a single unitary. Some of these comments have brought changes in the revised proposal, particularly a significant increase in area boards and strengthened governance for Oxford City.

The latest revised proposal is at www.betteroxfordshire.org

Cllr Price, the Leader of the Oxford City Council has commented:

“Our position remains the same. We call on the County Council to end this wasteful exercise that now seems more confused than ever and focus instead on solving the issues we are all facing over housing, infrastructure and skills shortages.”

We would welcome all comments from residents on the revised proposal. It seems that some changes have been made in response to resident concerns. We certainly agree with Cllr Price that the exercise has been wasteful of council taxpayers’ money, but this applies to the City Council as well as the County Council. We look forward to the results of various Freedom of Information requests to find out the total cost incurred by both authorities on consultancy and marketing at a time when adult social services and children’s services are fighting to maintain service levels at a time of huge government cuts. We believe that the outcomes need to be about quality, sufficiency and effective management of services to our residents.

There is ongoing debate about whether local councils should be reorganised. Austerity cuts affecting the County Council means that it’s having to cut or reduce services that are important to people, and it thinks reorganisation of the whole structure is necessary to use money more effectively.

There are two schools of thought on whether complete reorganisation is necessary.

Here is the link to the One Oxfordshire proposal supported by the leaders of the Conservative, Lib Dem and Labour groups on the County Council: it seeks to abolish the county council and the five district councils and replace them with one new unitary authority.

The City Council believes that the necessary incremental savings can be made if all existing authorities can come together and work as one combined authority, however it is likely that this can only be allowed by central government if the proposal includes a directly elected Mayor.

Here is the Oxford City Council web page article explaining the rationale for its petition against the One Oxfordshire proposal.

Disclaimer: any inaccuracy of information displayed on the above linked web pages are entirely the responsibility of the local authority concerned.

We urge all our residents to take part in the public consultation on the One Oxfordshire proposal, whether you are in favour of it or not – your comments will count. We are interested to hear your views on this: we think there are strengths and weaknesses to both proposals. Unitaries may be the future, but their number, size and even the principle are not yet decided and deserve wide discussion.

We think it is very important that all authorities continue to debate the issues with one another, rather than take polarised positions.

Find out more about the County Council’s proposals for a new, flexible system of daytime support across the county, and share your views on the options that have been proposed.

Book your place at one of their meetings.

Call 01865 323410 or email daytimesupportreview@oxfordshire.gov.uk. The County Council can organise transport for you or pay travelling costs if required.

For more information – visit their website or pick up a consultation pack at a daytime support centre or library.
Closing date for comments: 20 December 2016

Thanks to residents for telling Customer Services Manager Mark Peet your views at our Ward Focus Meeting. He has investigated your issues and reports back below on actions taken.

As promised I have a further update on improvements to the Residents and Visitors Parking Permit service.

In July I  advised that I would be looking at further ways to improve our online service and document validation service for residents, in particular around the Headington area, who are unable to upload documents as part of the application process.

I am pleased to inform you I have made changes to reflect the need to improve both of these areas.

It’s good to see positive changes being made by the County Council and an officer keen to come out to public meetings to listen to and act upon our residents’ concerns.

We are frequently asked for latest news on children’s centres. Here’s the latest County Council briefing.

This briefing updates you on the latest position with the council’s proposals for children’s services and its work with communities to identify local solutions for the delivery of open access services for children.

A decision on how the additional £2m will be spent will be taken by Cabinet on 24 May. Information about the proposals is available on our website here, and we will be sending further updates after this decision is taken by Cabinet.

The extension of contracts will give us more time to continue working with communities to develop the best possible local solutions for the continuation of open access services. We are now planning to host a community engagement event in November 2016, and any new community initiatives will likely be in place in March 2017.

We will shortly be updating our website, draft community framework and FAQs to reflect our new timeline. In the meantime we continue to welcome any enquiries from community groups who would be interested in continuing open access non-statutory services in their area.

Thanks to residents of Beech Road for informing us about power going off during and after wet weather. SSE will send out a team to investigate this on Monday and we’ll post an update when we know more.

Following our request for WC availability after 17:00 in Headington, we’re delighted that the City Council’s Streetscene team has enabled one of the Bury Knowle Park toilets near the London-bound bus stop to open 24/7.

We hope this will help residents and visitors caught short in the evenings, and encourage folk to use our restaurants, cafes and shops into the evening.

Headington is the only district centre with this facility.

During the month of November crews from Slade Fire station have attended:

6 of these homes didn’t have a smoke alarm working.

Fortunately, nobody has died as a result of a fire in their home.