Thanks to your tremendous support, the future of the red telephone box outside Headington Baptist Church is secure!
The spirited way in which Headington folk defended the kiosk featured in the Conservation Area Appraisal was tremendous, and helped us hugely in our negotiations with BT. Especial thanks go to Mark, Stella, Stephanie, Sr Marie Ann, Kathleen, Peter, Adrian and others for their sterling support. 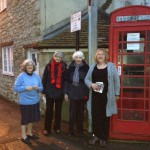 Despite an initially unfavourable response from the front line BT staff, the Payphones Manager was enthusiastic that the kiosk should be adopted by local residents: he was prepared to go ahead with this on payment of a nominal sum (£1.00) by the local authority, and for the box to be cared for and used in any way the residents wished by a local charity registered with the Charities Commission.
David and Ruth will pay the nominal sum from the Councillors’ Headington Ward Budget. The registered charity which will look after it and maintain it will be Headington Action (HCDA). For your information, the Friends of Old Headington group is not (yet) a registered charity so was ineligible on this occasion.
We have received a contract from BT and the box’s removal has been cancelled. BT will continue powering the light in the box but have specified that no other electrical equipment can be connected to their power supply, nor can any comms equipment from BT’s competitors be installed in the kiosk.
We shall need to check the small print in the next few days, and an application for the £1.00 ward spend will need to go through a call-in process before it can be authorised.
The Payphones Manager at BT mentioned that these boxes have been used in a number of ways by communities, including: nativity boxes at Christmas, book return and exchange boxes for rural libraries, story boxes, local history boxes, and defibrillator boxes. BT has teamed up with the Community Heartbeat Trust and will install a secure defibrillator in a kiosk if the community raises £2,000.
See here for an example
This is a remarkable victory won with very short deadlines and a great deal of work. At one stage we thought it would all hinge on whether the distance of the kiosk from the nearest payphone outside Barclays Bank was greater or less than 400 metres – we can now reveal that the City Council officer’s considered view was that:

Measuring as walking along the footway and cutting the corner at Barclays Bank the distance comes to 406 metres.  Even crossing the road twice is 403 metres.  Only as the crow flies does it come down to 392 metres.

What a privilege it was to be part of a magnificent team effort! Thanks everyone for your help. 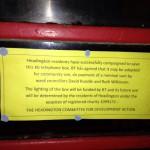