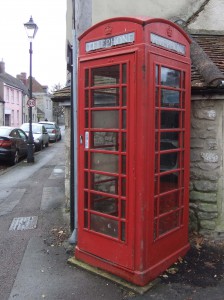 We were alerted today that BT is removing the lovely old red telephone box from Old High Street. Residents contacted us to ask if we could try a last ditch attempt to save it.

We have contacted BT. They say that a notice was put up inside the phone box facing out on 28/10/12 saying it hadn’t taken any money, it wasn’t being used, and it would be taken out unless someone sent in an objection.

There are apparently several ways to ‘save’ a phone box:
Sadly, the deadline for this has now expired, no objections were sent in by anyone, and the electricity has now been cut off.  The box is set to be be removed in the next week or so.
There is no appeals process at this late stage and BT have followed  the correct procedures.  Thank you to Stephanie Jenkins for taking this last photo.
UPDATE
The planning laws relating to Conservation Area Consent  changed recently so it is just possible that the planned removal of the phone box may have required consent – we have asked the officers to check.